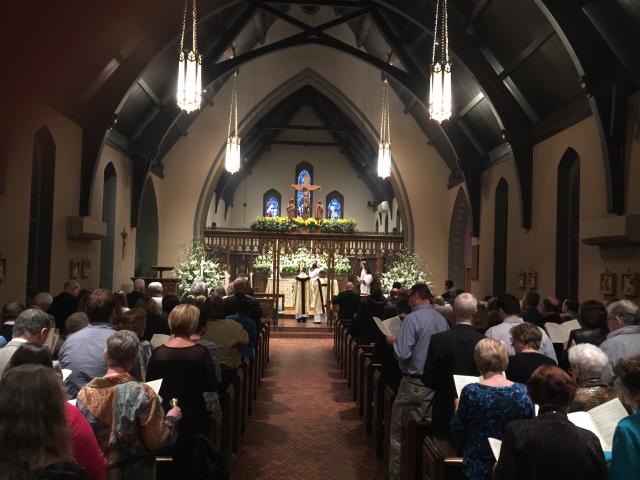 Happy Easter!!! The dictionary recognizes Resurrection (with an initial capital letter) as Jesus Christ’s return to life after death and burial. In some cases, though, the first definition listed is of resurrection = the act of rising from the dead. Not like I was truly dead but, when I arrived home, I was truly drained. Spring Break coinciding with Holy Week brought death and new life.

As you may have noticed, there was no Postulant’s Path article last month. Third Quarter, for me, was the most demanding so far on a variety of levels. I came home drained. Yet, a last minute change enabled me to be back in WI for the Diocesan Chrism Mass.  It was a blessing to witness the clergy of the diocese renew their ordination vows. Furthermore, Bishop Matt’s sermon regarding the mysteries of “oil” (in various forms and uses) was outstanding! I joked with some that I’d come home feeling a “quart low.” Without fail, being back for break took care of that feeling in short order!! Thank you.

The two questions about seminary that I got the most while home were: “Is it wonderful?” and/or “Is it hard?” The short answer to both is “yes.” However, my perception of how the questions were asked gave me additional insight and left me with ideas to contemplate. When asked these questions, I sometimes sensed a longing on the part of the person asking the question. Those who asked if it was wonderful seemed to be asking if seminary is similar to being on a spiritual retreat. Those who asked if were hard seemed to be asking if it is a boot camp for clergy. Mostly, both are true, in varying degrees at different times. Though, as seminarians, we sometimes fail to see how blessed we are to be immersed in a world of studying God’s Word. Often, we only see that we’re immersed; ankle deep, knee deep, up to our necks, or over our heads.

It is nice to be reminded that it IS wonderful while also recognizing that it IS hard. There’s something more at work here, as well. It goes beyond the community and the studies. It’s difficult to explain but involves the development of “self.” It is the still small voice of God that has been whispering two words; vulnerability and strength. These two words are the twin towers of God’s mercy and love. Through Christ’s life and death on earth, He shares in our vulnerability. Through His Resurrection, Word, and Spirit, we are granted strength. As our Risen Lord, He calls us to a future with Him. I hear Him call me from the future, to the future…a future that is somewhat unknown. His call says:

“Reach out to the vulnerable.”

“Be aware of being at the threshold and keep taking steps.”

“Be sure to take Sabbath, and know that there is no rest, except in Him who gives new life.”

It is the great breaking down and building up. Until this past Holy Week, I would’ve applied that phrase to seminary alone. Maybe  just because it sometimes feels to be on a higher intensity here. However, as Christians, we are each called to vulnerability and strength. We each have things being broken down and built anew in Christ. That’s Easter. That’s Resurrection. That’s the call on each of us to go forth and be His hands and feet on earth. We have been given new life and are to share this wondrous gift with those around us in the

I’ve arrived back at school with my “oil levels” refilled and restored. I keep you all in my prayers and ask yours for me. God is calling.