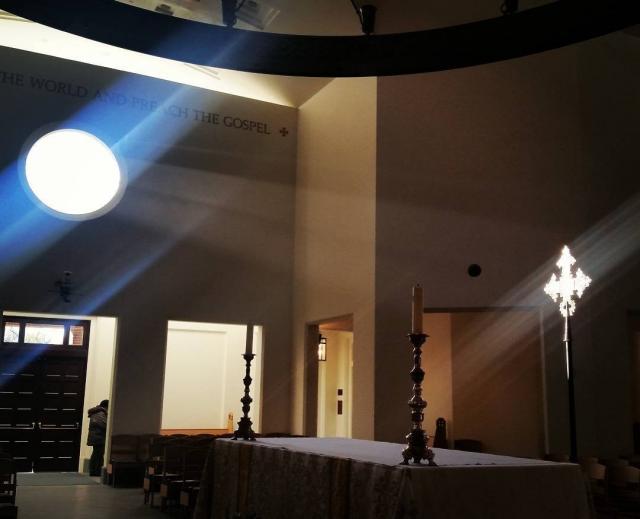 It’s hard to believe that, as I write this, my first year at seminary is coming to a close. It seems like only yesterday the U-Haul was parked outside of church while we went to one last morning prayer in the Christ the King Chapel before hitting the road. However, it also seems like I’ve been here for a long time and am saddened to realize that some of my classmates will soon be leaving this place thanks to graduation. It seems that “change” is constant, but it’s just one of the forms “formation” takes.

A year ago, while discerning between seminaries. Rev. John Inserra would remind me at the beginning of each trip, “Formation, formation, formation.” It was his way to keep my mind focused on selecting a seminary that would have the most to offer in forming me for future ministries. I can say that VTS has been the right choice for my formation, even in the most difficult of times or maybe thanks to them.

A recent sermon summed up a lot of what I’ve felt lately. It involved the story of Ananias (Acts 9:1-19). Ananias was a Jewish convert who, when God spoke to him in a dream, responds with, “Here I am.”, just like all of his heroes of the Hebrew bible did in response to God’s call. But then, God gives him directions to go to Tarsus to see the one guy, Saul, who’d just recently received orders to arrest any Christian Jews he found. Not exactly the kind of “mission from God” that Ananias had hoped for. God even gave him the street address for finding Saul! He meant business! Ananias pushed for clarification and God gave it. Ananias went despite not knowing what would happen to him when he found Saul. Ananias reached out, took a risk, and trusted God.

That’s what is asked of each of us. Reaching out, taking risks, and trusting God. Formation, formation, formation. It’s not always easy. In fact, rarely so. It’s often scary. It involves fear but also trust. Trust in the face of fear is what bravery looks like. One of my favorite motivational speakers is Jon Acuff. He’s been on the New York Times bestseller list with titles like Start: Punch Fear in the Faceand Do Over. He is also a Christian. His writing reflects his faith and spreads into the business world. One of my favorite of his quotes: “We make the thing we’re afraid of bigger than our God.” However, God is still with us!

Over the course of the past year, I left my home, my family & friends, my job, my parish. During the course of this year, I’ve taken classes where I thought I was in over my head and met people who are worlds apart from me in their beliefs. For the near future, I will spend my summer as a chaplain at a (primarily) Jewish eldercare facility. This fall, instead of doing my field education experience in a parish, I will be working with the chaplain’s office at Georgetown University. What happens after that, I haven’t a clue ! But this is the journey God has me on. It baffles my mind sometimes much like I’m sure being sent to the street called Straight baffled Ananias! But that’s the thing, none of us know what’s next for us…and it’s never about what we achieve but about what we’re asked to do and to trust in God.

We must remember that, along the way, we are NOT alone! This past month I’ve received notes from some of you and even a few visits…some planned, some surprises. Mother Jane Johnson came to stay with me while attending the Missional Voices Conference.  It was also great to see Ryan Pollock was attending from Nashotah, as well! Earlier in that week, just when I was feeling a bit overwhelmed, I got a surprise phone call from John Compton (who some of you may remember helped with the campaign for St. Nicholas Hall) who was in town and stopped by for a quick visit. This year has taught me that we journey between vulnerability and strength…sometimes it can be scary…but we are NEVER alone….God is by our side…and sometimes He sends angels, too.

On Thursday, May 19 th, I will have the opportunity to participate during my first VTS graduation ceremony. In addition to sending off many new friends, I will not only welcome but introduce our very own Bishop Matt as he receives an honorary doctorate. Please keep all the graduates of all the seminaries in your prayers as they head out into the “unknown” of God’s journey for them with the instructions, “Go into the world and preach the Gospel.”

PS Formation this month also included my first to serve as thurifer. Thanksgivings for Deacon Michele, Kaleigh, and Scott Fabiano who showed me the ropes while I was home for Easter. Deacon Michele instructed me to “smoke it up good!” I hope the photo shows that I did Grace proud and made it good and smoky!