In Acts 16:11-15, we read the account of the conversion of Lydia (and her entire household). Like Paul, we too traveled from Neapolis (now known as Kavala) to Philippi.

And on the Sabbath Day we went outside the gate to the riverside, where we supposed there was a place of prayer, and we sat down and spoke to the women who had come together.” (Acts 16:13)

Paul, in all of the readings, was sure to be at the synagogue on the Sabbath. However, at Philippi, there was no synangogue so that’s why he went out of the city to pray. The interesting thing about this riverside (at least on the day that we were there) is that the water is rushing and loud! Yet, even the intense volume would lend itself to pray…God’s very own “white noise” machine.

It seems sometimes that a lot of women dislike Paul. Yet, I love the fact that he, like Jesus, does NOT shy away from talking to women. (Something that culturally has a number of taboos attached.)

“One who heard us was named Lydia, from the city of Thayatira, a seller of purple goods, who was a worshipper of God. The Lord opened her heart to pay attention to what was said by Paul. And after she was baptized,and her household as well, ” (Acts 16:14-15a)

Lydia was NOT Jewish, but she was a business woman. Purple goods would only have been to royalty and those who worked with royalty. We’re talking about someone who knew her way around the “upper crust.” Quite possibly, even an educated woman. One thing I’d never heard in church before, but was part of the secular publication I’ve picked up here in Greece regarding Paul’ travels (and that the Greeks are proud of sharing), is that Lydia was the First European baptized by Paul. Not just first woman, but first European…period.

As to baptism in that river, I can attest to the fact that the river there is icy! It felt good on our worn feet! However, if it were me, it would have had to have ben quite something (the message Lydia heard that day) to get me to agree to full immersion in that river! But, that is the power of the message of Christ!

I give thanks for the orthodox monastery that has been placed next to this sight and for the gorgeous frescoes that line the ceiling there. It was powerful to go from Eucharist (celebrated by newly ordained Mother Michele) 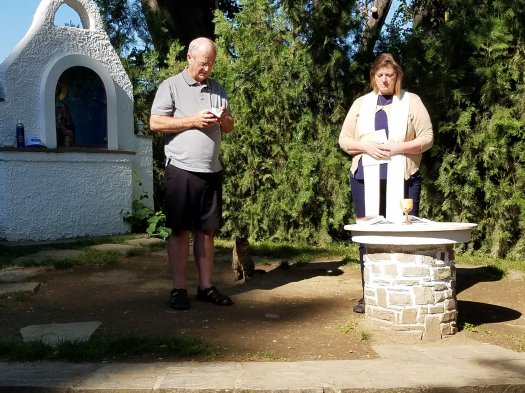 into the monastery with the story of Lydia, as well as the apostles, filling the ceiling with those who spread the Word. We concluded our time in Lydia’s place with Father Kamal urging us: “What have you done with your baptism?”

One Reply to “Lydia”