It is hard to believe that this “formal” portion of my pilgrimage is completed. I met new friends, spent time with long-time friends, and was even visited mid-trip by a friend from home. I learned about Greek history and culture and how it played a role in the ministry of both Saint Paul and Saint John. Phase One of the summer has come to a close and the next steps are about to begin.

Unfortunately, due to the crazy, intense, and engaging schedule (complicated by lack of internet), time was spent mostly “experiencing” with minimal time for reflection. I managed to jot a couple of memory joggers down. For those who have been watching this blog for updates, I apologize. Anything that managed to be updated was done on Instagram (see sidebar) or Facebook. I hope to write some reflections here over the coming weeks. For these next steps, more posts will occur here (hopefully, if there’s internet…funny how much we take wifi for granted in the US!) since I will be restricted from other forms of social media. (More on that at a later date.) 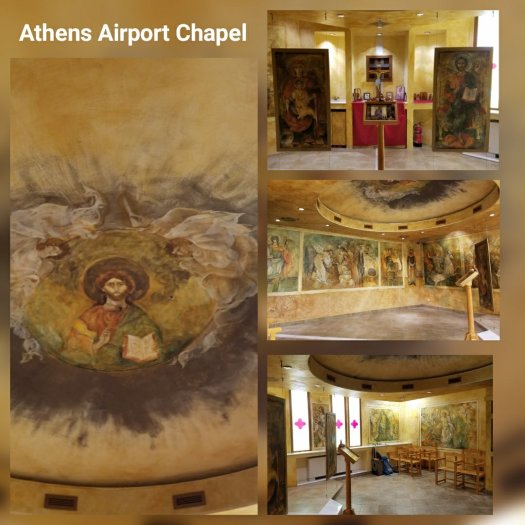 Today, after an overnight ferry trip from Patmos to Athens, we were dropped off at the Athens airport at 10:00 AM. Due to the fact that my flight does not depart until midnight, I was unable to go through security until after 4 PM. So I spent the day in a lovely chapel at the Athens airport reflecting, writing, and praying for my fellow travelers, for the diocesan youth at Camp back home, and those I will meet at Camp later this week. The chapel walls were covered with these modern versions of iconic frescoes. I was overwhelmed by the number that we saw. Some that I’ll be able to share, some that we were not allowed to photograph, and some that are so very familiar that it surprised me to see them in person!

But for now, my time in Greece is over. My passport has two new stamps. Sadly, the Anglican prayer beads that my friend, Brian, presented me at the 2015 Episcopal General Convention (and I’ve carried in my pocket everyday since to pray for my seminary classmates by name) broke as I went to remove it from my pocket for my security screening. The remnants have been tucked away so that it can be (hopefully) be restrung when I return to the US next month. In the meantime, please pray for my health and security. Pray for those I will meet at Camp. I was reminded by my friend, Robin, that she’d be worried if I didn’t have concerns. But, we know that God is already there, calling me there. Next step: visit a friend in Jordan.