Grace and peace to you from the plains of Ninevah! Unlike Jonah, I am here willingly while sharing the Gospel. There are moments that I marvel, “How’d I get here!?!” Then I look back on my life and see the points where I chose to follow (despite my own fears) God’s path (rather than my own). It hasn’t meant that life has always been easy on God’s path, but it is always interesting and filled with grace, mercy, and (often) delight. This summer is no exception and probably much closer to the rule.

When I last wrote, the pilgrimage to Greece to walk in the footsteps of Paul was just beginning. I often struggled with history through my academic life. In the early days of our pilgrimage, it still was “noise” in my head and I was anxious to discuss Paul. Yet, as I learned, understanding Paul, and the world in which he preached the Gospel, required that I discover his contextual basis: history. Suddenly, the pieces began to fall into place. History was no longer names and dates and locations but his“story”! Today, 2000 years later, our history is His Story. Context. We often can’t begin to understand another’s situation unless we know a bit about their history, their story. Furthermore, sometimes, stories are not shared until a relationship is established that opens our hearts and theirs to share histories. There will be much to share in the future about the time in Greece. For the moment, I’ll say that I have a new appreciation and am hungry to learn more histories. I know my time in Greece will have a profound affect on my ministry moving forward.

It was truly a blessing to study with Father Kamal Farah. He is an outstanding teacher who made me consider scripture in a very different and interactive way that was very different from what I’ve experienced at seminary. We learned so much from him that opened Paul’s world in a variety of ways. For me, one of the concepts I came to more fully understand under his teaching was: “Trust is a future word,” as related to the scriptural references to past, present, and future. The early Church was not concerned with future concepts the way that we are. They understood the future to be completely in God’s hands. And, after Christ’s death and resurrection, the future was filled with hope thereby making the action of trust an active, hopeful thing rather than something passive. 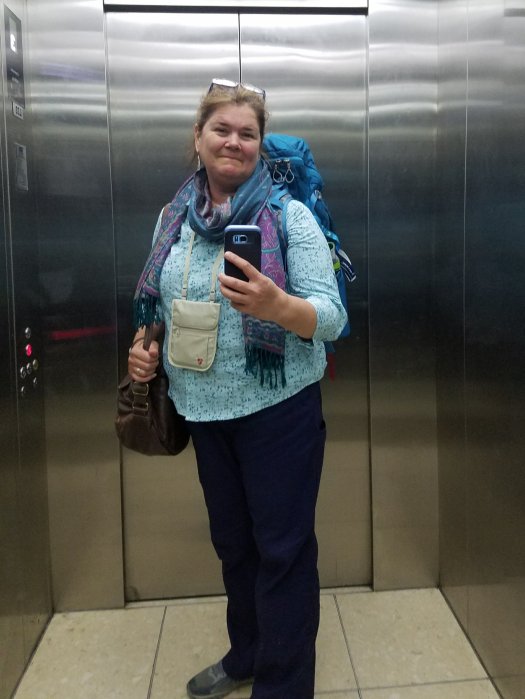 “Trust is a future word” also became my mantra as I left Greece and headed for the Middle East. It gave me peace while waiting in both Jordan and Iraq for those I knew who were to pick me up at the airports. In both cases (without internet, cell phone, or language skills), it would have been easy to succumb to panic in their absence. However, trusting that God would help me get through whatever next steps I’d be faced with helped me stay remarkably calm despite my fatigue upon arrival in the middle of those nights.

I am happy to report that for all the fears and apprehensions I had for the mission portion of my journey, they have been for naught. This is an amazing place of hope and growth as the people work to rebuild lives and communities. It has been an amazing blessing to serve in this place! I will never be the same after my time here and am already anxious to return here.

God is moving in this place. I had the blessing as God’s instrument one day in meeting a “person of peace”: someone whose heart God has been working on. This Muslim woman “connected” with me and invited me to her home later in the day. It was then that we (an Egyptian, female doctor in our group & I) discovered that God has been working on her heart and we were invited by the Spirit to share the Gospel with her. For me, it is humbling to be in this unfamiliar place, going into strangers’ makeshift homes, and witnessing the Spirit at work…over and over again. It has taught me the value of praying and listening to God’s tug on our hearts…both this woman’s and my own.

Prayer. What is God tugging at your heart about? There is just as much that God is calling us to do in our own communities as there is across the world. What is on your heart? Each of us can answer God’s call and share with those around us. It is in answering that tug that we see God at work and realize it is nothing we do of our own will that gets us to these places…other than saying “yes” to God’s tug. That’s how Paul ended up in Corinth tent making with Priscilla and Aquila. It is how Priscilla and Aquila ended up in a village I currently pass through each day. It is how the twelve became disciples…saying “yes” to God’s tug. What is God tugging at your heart about?

I have another month on the road. Please keep me in your prayers for continued safety and health. Next time I write for the Angelus, I will be back in Alexandria preparing for the final year of seminary. I’ll also prepare a presentation to share with all of you the next time I’m home. There is much about my own future that will be revealed in the coming months. Please pray for discernment as God’s plans for my future begin to be revealed. Trust is a future word. “Blessed is the man who trusts in the Lord, whose trust IS the Lord.” – Jeremiah 17:7