Having spent the night in the northern West Bank city of Nablus (the Biblical city of Shechem), I was afforded the opportunity to meet my friend’s Sunday school class and join them as they toured the Mount of Olives. It may only be 39 miles between the two cities however, our journey there took nearly three hours. Crossing “state” borders is a very different proposition over here. I was thankful for the opportunity to experience it with them.

For me, and the five Israeli citizens on our bus, crossing the border between Palestinian and Israeli regions was very similar to my experience in Kurdistan…long traffic lines which result in (at minimum) being asked to show our passports or (at maximum) having our vehicle searched and being questioned. This morning, it was merely a “stop and go” with barely a mention of passports…at least for the six of us and our driver.

For the remainder of the group, Palestinian born Christians, they had to get off the bus and walk through a checkpoint where they had to show their passports and (for the youth) permission slips and (adults) their permits. One gentleman in our group showed me the “wallet” that he keeps specifically for his documentation. In it is his identification, his “permit”, and his “specialty permit.” His permit enables him to request a specialty permit to visit Jerusalem. However, as a Palestinian Christian, he can only make a request to visit Jerusalem during the Christmas and Easter “seasons.” I wish I would’ve thought to ask if Christmas season includes Advent (since it clearly included Epiphany) and if Easter includes Lent (though I am doubtful). My friend shepherded his students through the checkpoint while we waited for them in a nearby parking area and watched for their appearance much later. Back in the US, we don’t think twice about crossing borders between states other than to take the occasional photo or pay the demanded toll. 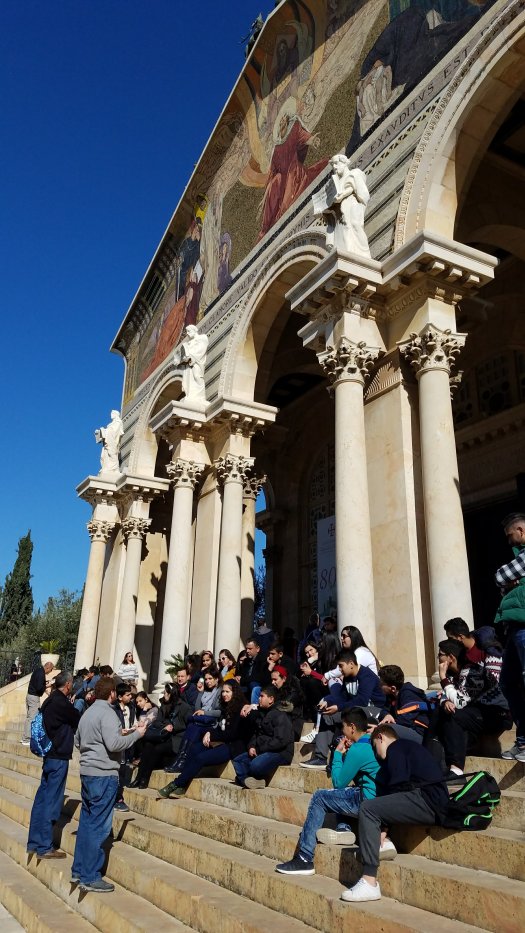 I will save sharing my own experience at the Mount of Olives for another day. For me, today was about experiencing life from a local perspective and to see my dear friend doing what he was called to do. While we are at seminary, it is sometimes hard to imagine what life will really look like once we are finished. “Here is my servant, whom I have chosen…” (Matthew 12:18) It brings me joy to see the fruit of seminary in my friend’s life! 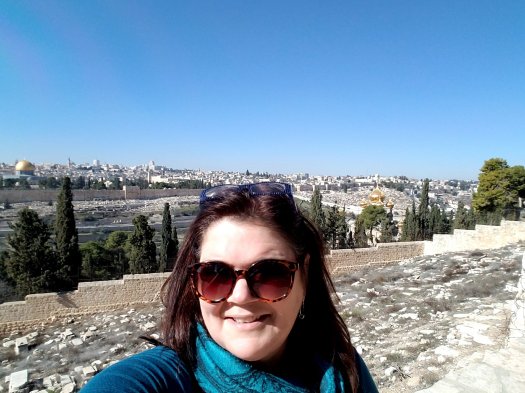 I, on the other hand, am still a pilgrim on a journey without details of where it will lead. For today, it led first to where I could, as Jesus did, look over the city of Jerusalem to see where the Temple Mount had been and where today stands the Dome of the Rock (gold dome over my left shoulder) and the Church of St. Mary Magdalene (gold domes over my right shoulder)…(hmmm, that’s a lot of gold over my head and shoulders – pun could not be resisted).

Today, my day began with a journey to Jerusalem that placed me with ten of my classmates at St. George’s College to take our January term class for seminary.

Each room is numbered and named. The irony of the naming for my room, in light of this past Sunday’s scripture, is not lost on me. 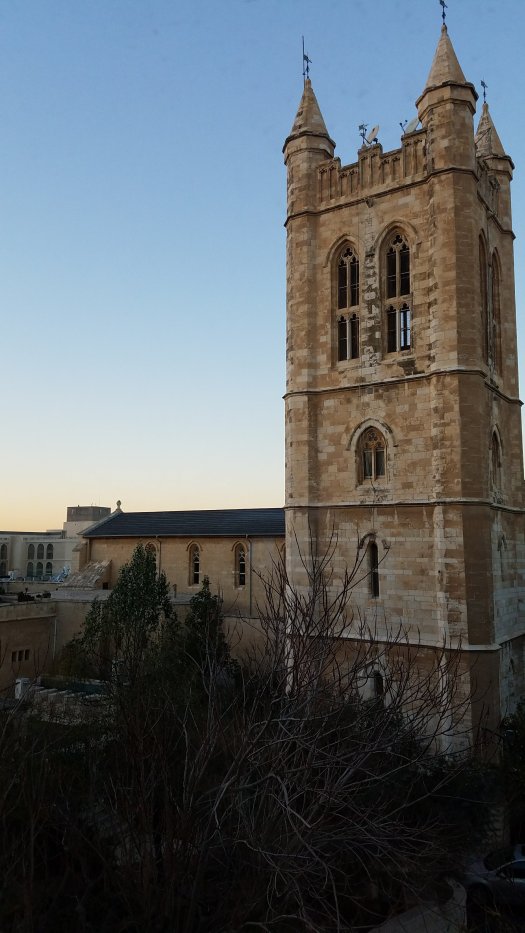 The view from my room is as enjoyable as my first “on campus” meal. 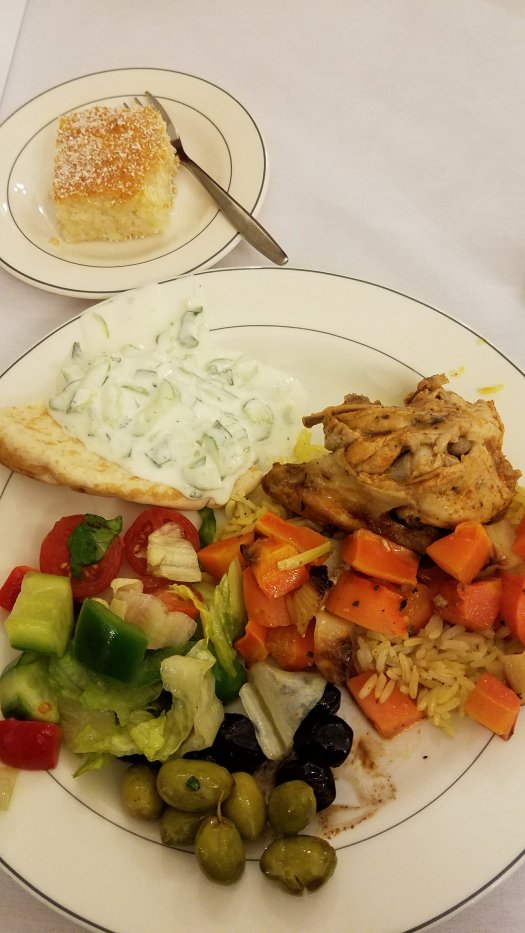 Tuesday, January 9th will be our first full day of class. I’d say tomorrow, but the seven hour diference between local time and my usual Eastern Standard Time is messing with how and when my posts will appear Stateside. Yesterday and today (for me) may appear as a double up of postings (for you). Hopefully, that’ll work itself in the “wash” soon….hmmm, going to need to do laundry while here…but now I’m just getting ahead of myself. Stay tuned.