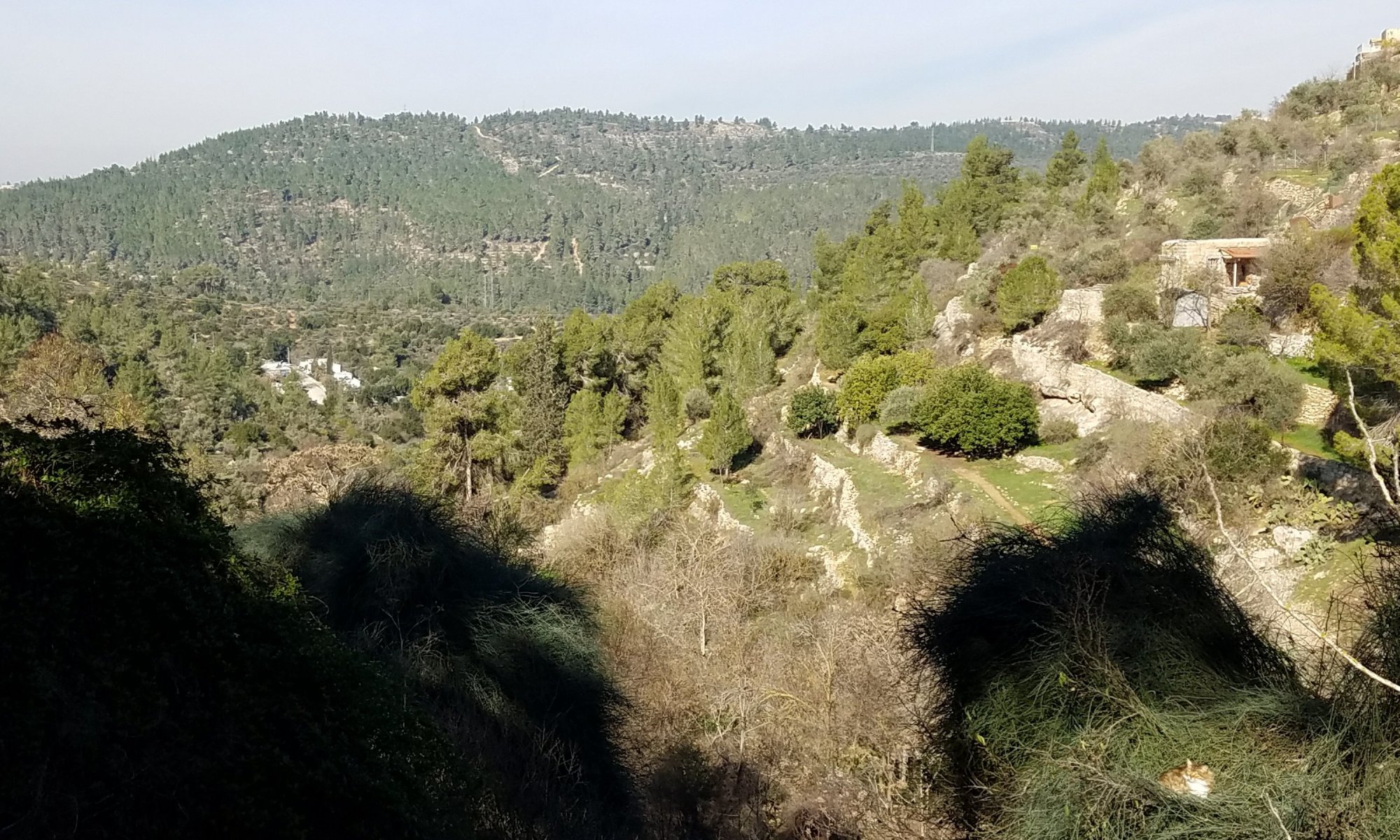 “In those days Mary set out and went with haste to a Judean town in the hill country” (Luke 1:39) 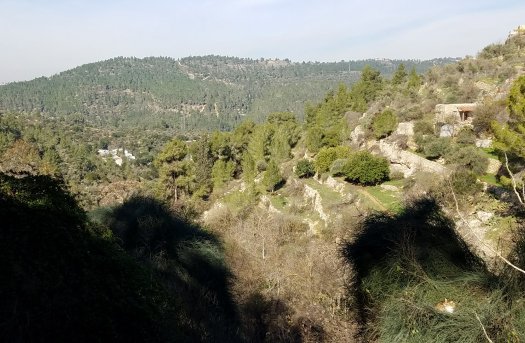 It is merely the beginning of our journey and that one verse is forever changed, for me! Mary went to the “hill country” to visit Elizabeth and Zechariah. Ein Karem or Ein Kerem…no matter how you spell it, tradition says that it is the village where John the Baptist’s parents lived and he grew up. It is where, we are told, Mary went after she was told that she was to be the “theotokos” – the “God bearer”.

Hill Country. Just a short journey from the hustle and bustle that is Jerusalem is this bit of hill country. In many ways, the scenic views and winding roads to get here reminded me of the Black Hills of South Dakota and the hill country surrounding Delphi, Greece. Imagine. Mary, upon learning she is pregnant travels to this place to visit Elizabeth!

Though I’d never considered it before, I am now left wondering “from where?” I’d always assumed she’d traveled from Nazareth. However, now that we’ve visited her parents’ family home in nearby Bethesda (in Jerusalem) AND I know that she was betrothed, but not yet married, to Joseph, I am left to wonder whether she came the one day’s journey from her parents’ home rather than the nine day’s journey from Joseph’s Nazareth. Could Joseph, a carpenter, have been doing work near Bethesda or Ein Karem? So many questions that we do not have answers to.

We visited the Church of the Visitation. In the tranquil grotto there, one wall is covered with oversized tiles that bear the words of Mary’s Song of Praise, the Magnificat. Each tile is in a separate language from around the globe. We, as do many pilgrims, took a moment to read the words in our own language: Spanish, Kasem (Ghana), and English. We then had time to contemplate in the grotto with its mosaics or in the Church. (I’ll let you look via the hyperlink at the many things one can see here.) As for me, I went into the Church where I was surprised to find, among the many paintings of biblical and (Franciscan) historical narratives, images of the women of the Old Testament plus four “virtues” high above in each corner of the sanctuary.

Jahel. I’ve never before seen an image of her in a place of (somewhat) prominence in a church. Jahel’s story can be found in Judges 4:17-24. I could hardly believe I was seeing this brave woman’s image. There she was with her tent stake in her hand! Her story is violent yet, for me, it is a story of facing fear that, in a time about ten years ago when I was facing fears, I gained strength from her story.

She is not alone on these walls: Sarah, Rachel, Miriam, Anna, Deborah, Queen Esther, and Ruth were all there with her. Women with stories that can give us each strength. In the corners were four virtues including the one that has meant so much to me since my journey to Iraq: Fortitude. Fortitude, the form of bravery that takes place when we are willing to face the unknown, with its potential peril, but are able to trust, as we move forward, based on what we have seen God do in our lives in the past. “Trust is a future word.”

The women all leaned into their knowledge of what God had done in the past to support them as they faced whichever individual fear at hand. For Jahel (Jael), it was Sisera. For Mary, it was the fear of being found out to be pregnant and not married. For Elizabeth, whom she visits, it was facing a community, for which her husband was its spiritual leader, as a pregnant woman who had previously been deemed “barren.

Barren. Like “hill country,” it is another realization that will haunt me from this pilgrimage. If a woman had been married for at least ten years and not given birth to a child, she was deemed barren. Barren meant she was worthless. Barren meant her husband could take another woman. “Barren” was a shame word. By it, we also come to understand a possible age for Elizabeth. I’ve always thought of her as “older.” (Maybe because of the story of Sarah who was 90 when she got pregnant.) Yes, Elizabeth was older than Mary but, in actuality, she was probably only 30. One of our female pilgrims turned 30 this week. That fact, made Elizabeth’s possible age even morestriking. We were also told that the reason that the Church of the Visitation is at a distance from the Church of John the Baptist

(where Elizabeth & Zechariah’s home is found in its lower areas) is because Elizabeth would have been staying in a field outside of the city due to the shame of being pregnant after being deemed barren. (The subtext is that the shame is due because the pregnancy “proves” either the woman has been with another man OR has been “withholding” by some means so as not to conceive earlier.)

These women. The things they faced. I found myself recognizing their strength in a new way. I found myself giving great thanks for them and wanting to share their stories of strength with you right away. But, the Holy Spirit has a funny way of ensuring I don’t get too far ahead of myself. I felt their strength but did not fully understand their fear, until afterwards. Yesterday, while at Dome of the Rock, we had a break to use the restrooms. I was highly aware of my being a woman in that place. My body and head were covered (not too difficult). I could not touch a male or laugh loudly (for me, more difficult). My time in Iraq had taught me well the ways to behave as a woman in a Muslim world. 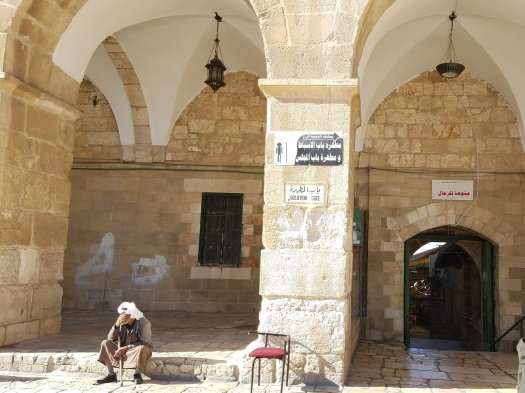 It turns out, it also taught me “too” well. I’d been attempting to find the sign with the skirt wearing stick figure that our guide told the women to look for. All the signs I found were of the stick-man plus, I realized I was alone. There are only four women in our group (including me) and I’d somehow become separated from them. I could not find the sign for women and felt the pangs of panic raise up in my spirit. After a wild-goose chase search, I finally came upon the other three women who pointed me in the direction for the restroom. When I got to it, the sign above it had the stick-man…and I froze. I could not enter. Two from our group prodded me, “Go ahead. Just go in there.” I was frozen.

In the US, I have been known to “jump the line” for the Ladies Room and go into the Mens Room once or twice. But here…I was frozen. Somewhere, in the deep recesses of my mind, was the awareness that I’d lived with this past summer; it was the reality that, as a woman, I should NEVER walk alone and I should NEVER be caught in a place designated for men. This past summer, it could have meant my arrest, or worse. Standing in the darkened hallway (shown above), with a sign above me showing a place designated for a man, I was frozen while my fellow classmates urged me to “just do it.” I was in full on panic, yet I asked the College Dean’s wife if she would stay with me so, at least, I would not be breaking both rules that just months ago could have caused me great harm. I walked into the stall, locked the door with the dean’s wife standing outside, removed my skirt and pants, sat down, and wept. All of the fear and panic washed over me and through me and released in tears and sobs. (I find that even now, as I type this, hoping to share a small measure of my fear and panic, I am in tears all over again.) This. This is the fear and panic these strong women of the bible may also have faced.

Mary’s Magnificat means SO much more to me today. On Christmas Eve morning, I preached of Mary’s bravery in saying “yes” to God. Saying “yes” to something that could mean that the powers of the day would have her stoned to death. Yet, her first question to the angel is “How can this be?” Today, I realize I hadn’t yet comprehended the depths of her bravery.

I will look at Mary and Elizabeth in an entirely new way thanks to this pilgrimage. They lived in the days of Herod the Great…a man so power driven and evil that not only did he order the Slaughter of the Innocents, in an effort to claim the life of the newborn king the Magi told him of, but he had his own wife and adult sons murdered during his lifetime. These were the times of Mary & Elizabeth. In this place of the Vistiation, I purchased the above olivewood Mary & Elizabeth. I’ve never shown devotion for them, in the past, in the way that some others do. However, today, in light of facing the fears that accompany being female, that has changed. I am changed…and stronger for it.

“My soul proclaims the greatness of the Lord, my spirit rejoices in God my Savior.” (Luke 1:46)

One Reply to “Brave Women in the Hill Country”